Kaur and Kaur: An experience with Foot Macrodactyly: A case report and review of literature

An experience with Foot Macrodactyly: A case report and review of literature

Macrodactyly is a rare congenital malformation with clinical manifestations such as enlargement of soft tissue and osseous elements. It causes various health issues such as pain, difficulty in wearing shoes, impairment in ambulatory ability and gait development, aesthetic problem, and psychological issues. The aetiology of macrodactyly is ambiguous; however, its association with PIK3CA /AKT1 genes has been reported recently. In the present study, a rare congenital macrodactyly of second and third toe of right foot along with deformed leg in 16-year-old girl has been reported. A progressive increase in the size of the second and third toe of the right foot and deformed reddish swollen area on the same lower leg below knee was seen in the patient. The malformation was present at the time of birth and at the age of one year the patient was operated for macrodactyly, but again the toe progressively increased to the previous size. She was presented with multiple health problems. There was no positive family history and/or other congenital malformation. Thus, it was suggested that due to variable phenotypic manifestations, appropriate treatment should be chosen for the patient individually.

Macrodactyly of the foot is a rare congenital anaomaly with diverse clinical manifestations and involves multivarious elements1 with an incidence of 1 in 18000. 2 It is characterized by an increase in the size of phalanges, tendons, nerves, vessels, subcutaneous fat, fingernails and skin, but not of metacarpals or metatarsals. It causes numerous tribulations such as pain, calluses, ulcer, difficulty in wearing shoes, impairment in ambulatory ability and gait development, aesthetic problem, and psychological issues. 3 Macrodactyly of the foot is relatively less common and involves the second ray, then the third, followed by the first, fourth, and fifth. 4 Owing to the variable phenotypic manifestation and low frequency, no standard protocol for the treatment of macrodactyly is there, thus, presenting a unique challenge for surgeons with correcting abnormalities. 5 The aetiology of macrodactyly is not well understood, however, its association with PIK3CA /AKT1 genes has been reported in 24 patients mosaic for this variant. 6, 7 In this case study, we reported a rare congenital macrodactyly of second and third toe of right foot along with deformed leg in 16-year-old girl.

The case was presented as 16 year old girl from Kapoorgarh village of Amloh district in Punjab, with the complaint of progressive increase in the size of the second and third toe of the right foot and deformed reddish swollen area on the same lower leg below knee (Figure 1, Figure 2). She was born normal twin-delivery to a 24 years old mother and 26 years old father. The parents of the patient reported that malformation was present at the time of birth and at the age of one year the patient was operated for macrodactyly, but again the toe progressively increased to the previous size. The walking and shoe wear were difficult for her and even caused the size of shoes of both feet differ from each other. There was no positive family history and/or other congenital malformation. The chromosomal studies suggested that chromosomal constitution in both the twin sisters and mother was 46, XX and 46, XY in father. The twin sister of the patient showed normal growth of her limbs. Since, the patient resides in a rural area so no specific prognosis, diagnosis and treatment was available. 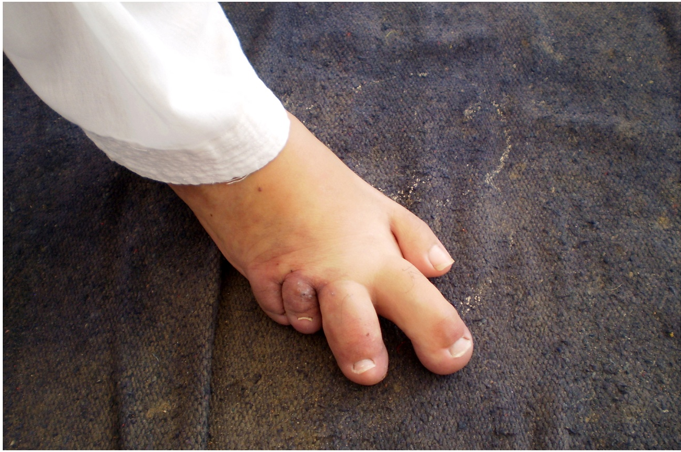 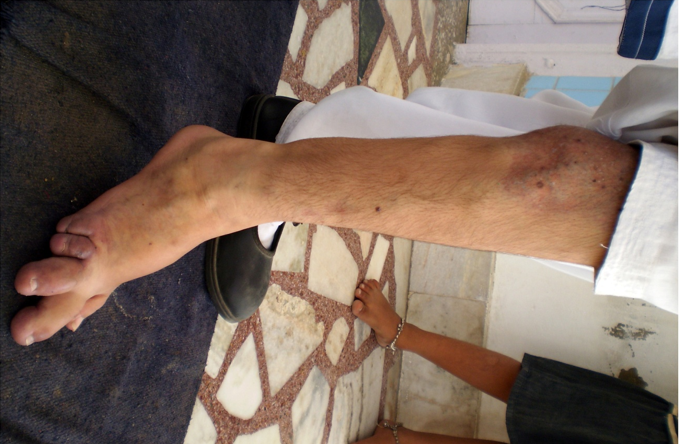 The above case report featured pedal macrodactyly in a girl exhibiting the increased size of second and third toe of right foot, and the fourth and fifth toes were also small in size and seem to be abnormal. This deformity also extended to the leg and swollen reddish area was observed on the leg. The left leg and upper limbs showed a normal growth pattern. The patient did not have any family history of similar deformities. Even the limbs of the twin sister of the patient also showed a normal growth pattern. This is consistent with the previous literature which states that heredity does not play a role.8, 10

Macrodactyly is the result of interaction of two or more intrinsic and extrinsic agents (genetic and/or environmental) as postulated by Barsky.8 He further conceptualized that during foetal development some disturbance of growth-limiting factor occurs in the affected local area which continues to increase in size. Aetiopathogenesis of this condition is still unclear. Two concepts have been put forward; first concept is associated with neurofibromatosis which is supported by Brooks and Lehman 11 who believed neurofibromatosis of periosteal nerves to be the main cause of rapid localized growth. Moore 12 also argued strongly in favour of neurofibromatosis stating that it is the cause of the hypertrophy, after he observed that there is a definitive segmental relationship between affected nerve and overgrowth. However, Thorne et al. 13 in their study of 13 cases, did not find any evidence of neurofibromatosis. Second concept reflects the basic process of lipomatous degeneration as suggested by Inglis. 14 According to him, the enlargement was influenced by the neurointrinsic factor of neurofibromatosis acting locally. He demonstrated a strikingly similar pathologic picture between neural enlargement of macrodactyly and section of terminal branches of proved cases of neurofibromatosis.

Sever et al. 9 demonstrated that the affected digit showed advanced bone maturation as compared to radiological appearance of epiphyseal centre of the unaffected toes. In macrodactyly, there is an increase in the size of the phalanges, tendons, nerves, vessels, subcutaneous fact, fingernails and skin but not of metacarpals or metatarsals as determined by Barsky 8 and Tuli. 10 Syed et al. 15 also observed that basic lesion in foot macrodactyly was due to excessive proliferation and accumulation of adipose tissue.

Surgical reduction of foot macrodactyly aims to achieve a painless and satisfactory aesthetic foot by destroying the growth part of the bone along with removal of the excess tissue as possible. Surgical options include debulking of soft tissues, amputation of distal phalanx, middle phalanx, or the whole ray, and epiphysiodesis by stapling or ruining the epiphysis to prevent additional longitudinal growth without controlling the circumferential growth. Debulking procedures can be performed with epiphysiodesis to reduce the size of the toe, but it sometimes has to be repeated because of progressive recurrence of the macrodactyly. 16

The patient presented in this case report was operated for surgery to treat the macrodactyly, but after surgery the affected region was observed to reoccur progressively to the previous size, demanding the need of repeated surgery. It has been reported in the literature that after treatment the digits remain thick, heavy and somewhat ugly even after defatting. The fingers also stiffen even more with age. In this condition, the blood vessels are frequently either of normal calibers or only slightly enlarged, making the affected digit poorly vascularized. It reduced the healing potential which increases the incidence of wound breakdown and infection. 16, 17

Because of the rarity of the condition, ray amputation of three cases with good cosmetic and functional results have been reported by Bulut et al. 18 suggesting that it is an effective single-stage treatment method for cases of advanced or recurrent macrodactyly of the lower toes. Katz 19 also observed a progressive macrodactyly in a patient (48-year-old man), who was presented with a gross deformity of his right foot and ankle. The toes of his foot, although always large and deformed, had started to grow again when he was approximately 43 years old. Surgical decision was for amputation of the fifth toe and partial ray resection of the fifth metatarsal. Despite having a wound-healing complication, the patient was discharged 19 days after surgery.

On the contrary, it was reported that every enlargement of the foot, or any element of the foot, is not a macrodactyly. Enlargement of a toe could result from the existence of a hemangioma, or some other neoplasm, in which only the overlying skin and adjacent soft tissues are occupied, with no radiographic evidence of an increased size of the osseous elements. 20 “False macrodactyly” can occur in other diseases such as Ollier's disease, Maffucci's syndrome, vascular malformation, neurofibromatosis and Milroy's disease. 16

No agreement has been reached regarding the treatment of foot macrodactyly. Thus, integrating advance technologies such as detection of gene mutation helps comprehending these congenital abnormalities at molecular level and designing novel strategies for treatment.

The authors declare that there are no conflicts of interest regarding the publication of this paper.

K Inglis Local gigantism (a manifestation of neuro fibromatosis): Its relation to general gigantism and to acromegaly illustrating the influence of intrinsic factors in disease when development of the body is abnormalAm J Pathol19502610591083

© This is an open access article distributed under the terms of the Creative Commons Attribution-NonCommercial-ShareAlike 4.0 International License which permits unrestricted use, distribution, and reproduction in any medium, provided the original author and source are credited.