Introduction: The calcaneal spur is also known as an enthesophyte which is a bony outgrowth from the calcaneum at the plantar fascia insertion. Treatment aspect ranges from initial conservative methods, invasive techniques to surgical excision of the spur in cases which are not responding to any other alternative methods. This article aims in evaluating the functional outcome of calcaneal spur excision coupled with a dose of autologous platelet-rich plasma injection in recalcitrant cases of the calcaneal spur.

Materials and Methods: A total of 42 cases of confirmed calcaneal spur cases were recruited for the study. All participants were offered with calcaneal excision with a dose of autologous platelet-rich plasma injection. All patients were evaluated preoperatively and post-operatively with VAS and FFI scores at the end of the 1st, 3rd, and 6th months.

Results: The patients who received calcaneal spur excision along with a single dose of autologous platelet-rich plasma injection reported statistically significant pain relief at the end of 6 months while comparing with the pre-operative VAS score (p = 0.003) and FFI score showed a statistically significant functional outcome between both groups at the end of 6 months (p <0.001).

Conclusion: Surgical removal of calcaneal spur along with a dose of an autologous platelet-rich plasma injection serve the better management for calcaneal spur and improves the functional quality of life.

One of the most common orthopedic-related complaints in an out-patient setup is heel pain.1 The causes are multifactorial such as Plantar fasciitis, Retrocalcaneal bursitis, Achilles tendinitis, calcaneal spur, Haglund deformity, chronic Achilles tendinopathy, calcaneal fractures, nerve entrapment such as tarsal tunnel syndrome.2 The calcaneal spur can be of two types plantar spur or Achilles spur.3 The calcaneal spur is also known as an enthesophyte which is a bony outgrowth from the calcaneum at the plantar fascia insertion which was first described by a German Physician in 1900 Plettner.4, 5 About 10% of people experience plantar heel pain during their lifetime to seek medical attention.6

The cause for the development of calcaneal spur remains controversial. One such being longitudinal traction hypothesis wherein inflammation and reactive ossification of the site of attachment of the plantar fascia to the calcaneum occurs, particularly chondral and intramembranous ossification.7, 8, 9 Another hypothesis being repetitive microtrauma by overloading of the longitudinal arches, which in turn produces focal tears and chronic inflammation at the bone-fascia interface.10

Activities such as running, jumping and dance are prone to increase the incidence of this condition.11 Obesity and pes planus are known risk factors associated with the development of calcaneal spur.9 It occurs in either sex with increasing incidence in middle to elderly age group or younger population who are involved in running, or jumping activities. These patients present with night pain, pain with the initial steps after waking up in the morning which gets relieved with further walking and rest.12, 13, 14

Treatment aspect ranges from initial conservative methods such as ice pack, underwater exercises, log roll under the feet, MCR footwear to invasive techniques such as local steroid injection or platelet-rich plasma infiltration to surgical excision of the spur in cases which are not responding to any other alternative methods.15, 16, 17, 18 Our study was to assess the functional outcome of surgical excision of calcaneal spurs coupled with a dose of autologous platelet-rich plasma injection in symptomatic patients who are recalcitrant to conservative methods of treatment.

With level IV evidence, a prospective cohort study was performed from January 2017 to December 2018 with 127 clinically diagnosed heel pain patients who were subjected to radiographs of the pathological foot and confirmed the presence of calcaneal spur in 42 patients. 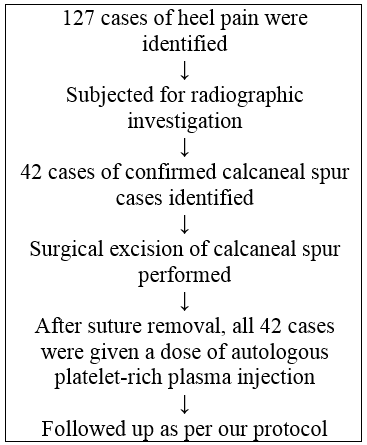 After getting IEC clearance and informed & written consent, for all 42 patients, pre-operative evaluations were done and explained the need for autologous platelet-rich plasma injection after suture removal from the surgical site.

Surgical procedure: A longitudinal linear incision was taken over the medial aspect of the foot of around 3 – 4 cm just above the junction of plantar skin over spur under fluoroscopic guidance as shown in Figure 2. Blunt dissection done till plantar fascia and subcutaneous layer separated from the fascia. Flexor digitorum brevis was resected from the spur. Using osteotome, the spur was transected under fluoroscopic guidance and removed with a rongeur. Edges were smoothened and bone wax was applied to achieve hemostasis. A sterile dressing and below knee POP slab were applied until suture removal.

A total of 30 ml of venous blood was withdrawn in the vial containing sodium citrate from the patient and subjected to soft spin centrifugation of 3000 rpm for 10 minutes. The resultant plasma was transferred to a plain vial for hard spin centrifugation of 5000 rpm for 10 minutes as shown in Figure 3. 5 to 6 ml of autologous platelet-rich plasma separated and 10% calcium gluconate was added in the ratio of 10:1 before injecting into the plantar fascia as shown in Figure 2. The patient was advised not to consume any NSAIDs and not to bear weight in the same foot for 24 hours following which staged physiotherapy and plantar fascia strengthening exercises were started. 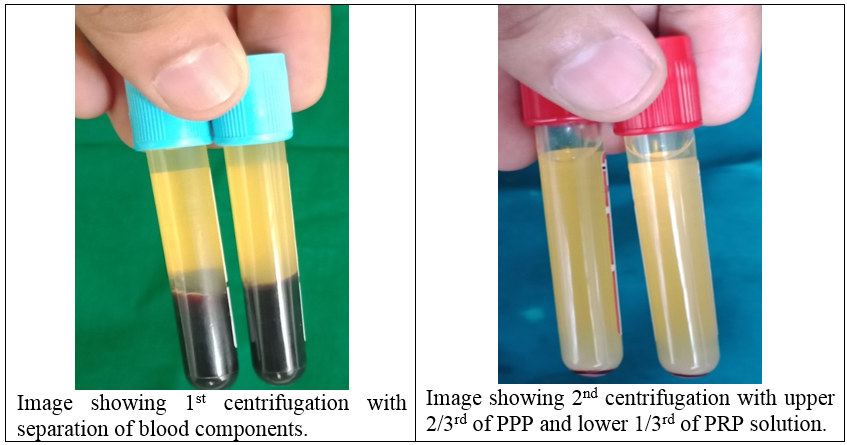 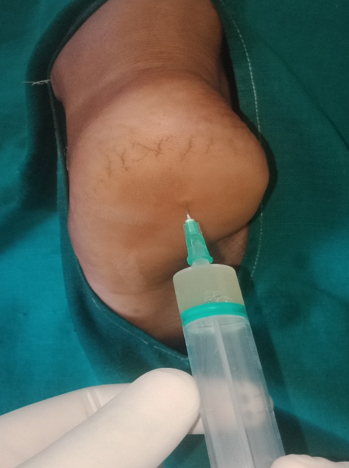 The VAS for pain and FFI for functional outcome were evaluated to study participants pre-operatively and post-operatively at the end of 1st, 3rd, and 6th months. The descriptive-analytical statistics were evaluated statistically with IBM SPSS Statistics for Windows, Version 24.0, IBM Corp, Chicago, IL. Paired ‘t’ test was used to compare the outcomes before and after the procedure and a p-value less than 0.05 was considered significant.

Most of the patients presenting to an orthopedics OPD with heel pain are due to plantar fasciitis, which is inflammation of the plantar fascia at the insertion site to the medial calcaneal tuberosity. This is also associated with the development of calcaneal spur, there is no clear evidence regarding their association.19, 20 According to the available literature, 30% of the calcaneal spurs are asymptomatic and are associated with plantar fasciitis in 80% of the cases.1, 21 A total of 15.5% of the normal population can reveal a calcaneal spur and there is no clear evidence regarding their association with the size and direction of the spur with heel pain.22, 23

Systemic conditions associated with calcaneal spur formation are rheumatoid arthritis, ankylosing spondylitis, Reiter syndrome, diffuse idiopathic skeletal hyperostosis, psoriatic arthritis, also obesity, aging, biomechanical abnormalities in the foot such as tight Achilles tendon, pes cavus, & pes planus, occupational causes such as dance, sports, and prolonged standing are also contributing to formation the spur. These patients usually present with bilateral spur.2, 3, 4, 5, 6 But unilateral presentation is the most common form seen in around 70% of the subjects.4 Irving et al reported a strong association between high body mass index and calcaneal spur formation in non-athletic populations.7 Kuyucu et al reported a major linear correlation between the length of the spur with the severity of pain, body mass index, morning stiffness, and worst foot functional scores.3 Johal et al described a method of measuring the calcaneal spur length based on the lateral radiographs of the calcaneum where the first line corresponds to the calcaneal border and the second line from the calcaneal border to the tip of the spur and this length had a positive correlation with the severity of pain and also the chances of failure of conservative methods to alleviate the pain were high and need for surgical intervention were warranted.8 The diagnosis of plantar fasciitis is mainly clinical, based on the typical history, site of tenderness, in our study we found a statistically significant number of patients associated with calcaneal spur based on radiographs. Various authors postulated that plantar fasciitis is a triggering factor for the development of calcaneal spur.9, 24, 25, 26 Surgical treatment of the spur is the last attempt to treat the pain and discomfort of the patient, but it has its complications such as infection, plantar fascia rupture leading to flat foot and inciting degenerative arthritis in the subtalar and tarsometatarsal joints due to altered biomechanics, pain not relieved on spur excision as the cause of pain is multifactorial in most of the subjects, fat pad necrosis.

Surgical removal of calcaneal spur along with a dose of an autologous platelet-rich plasma injection serves to be better management for calcaneal spur with improved functional quality of life.

This research did not receive any specific grant from funding agencies in the public, commercial, or not-for-profit sectors.

Ligaments and Tendons: Research and Clinical PracticeAdvances in Muscles201154141