Materials and Methods: We used the block randomization technique. Two groups were prepared with 30 patients in each group. One group of patients received PRP and the other received local steroid injection. Patients were evaluated at the time of procedure and immediately after the procedure, at six weeks, three months, and six months, using the visual analog score and Liverpool's elbow score.

Results: At the end of 6 months, follow-up patients in the PRP injection group show good clinical and functional compare to the steroid group of patients.

Lateral epicondylitis commonly referred to as ‘tennis elbow’ is mostly observed in the 3rd and 4th decade of life in around 2% -3% of the population. The cause of the disease is due to overload activity of extensors of the hand and abnormal pathological responses in the lateral epicondyle of the elbow at the common extensor tendon origin.1 The tendon may sustain small tears which lead to fibrocartilaginous metaplasia, microscopic calcification, and finally a painful vascular reaction. Long term, this means there is disruption of the collagen matrix and the collagen repair cycle.2

Treatment modalities for the treatment of lateral epicondylitis include analgesics and immobilization. 90% of cases resolve spontaneously within 6-12 months. Other modalities for lateral epicondylitis include the use of a tennis elbow brace and working style modification. In persistent & recurrent cases, surgical intervention may be indicated such as the Homan’s procedure or Garden’s procedure.3

This study will help us to know which amongst the two treatments (PRP and Corticosteroids) is more effective both subjectively and functionally.

It is a prospective comparative study conducted in 60 adult patients (block randomized with 30 patients in each group) who presented in our opd with the clinical feature of lateral epicondylitis and who were not better with 6 weeks of conservative treatment were included after explaining the procedure with consent. Patients with type 2 diabetes mellitus, rheumatoid arthritis, or a history of trauma were not included in our group. Patients who have previously received an injection at the lateral epicondyle in the last 3 months were also excluded from the study.

Patients are advised no strenuous activities of the affected for 7 days after the injection with only oral tramadol with paracetamol given for analgesia.

The data were analyzed using SPSS statistical software version 20.0. Categorical data were expressed in terms of rates, ratios, and percentages, and continuous variables were expressed as mean ± standard deviation (SD). The comparison of mean VAS score and LES scores from enrolment to follow-up were compared by one-way ANOVA test. A 95% CI, the probability value of ≤0.050 was considered statistically significant. 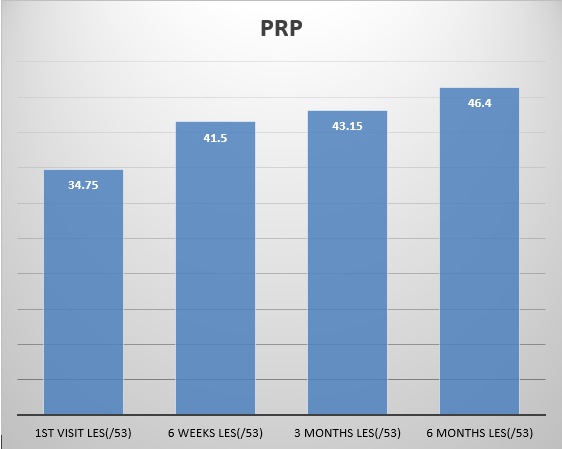 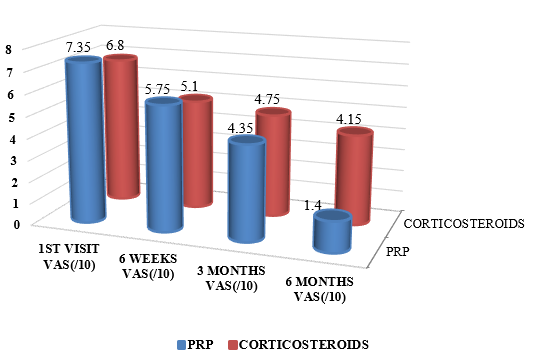 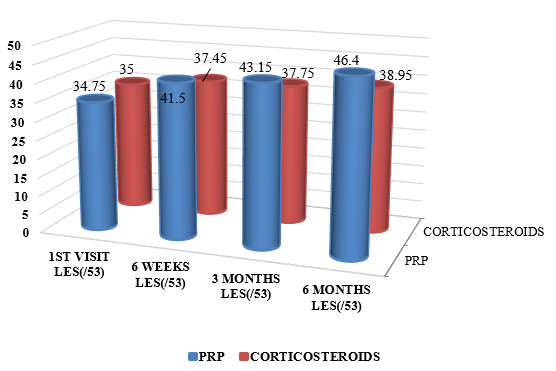 Thanasas C, Papadimitriou G, Charalambidis C, Papanikolaou A conducted a randomized control study on PRP with autologous whole Blood for treatment of tennis elbow in 28 patients under ultrasound guidance. Evaluation using a pain VAS and Liverpool elbow score was performed at six weeks, three months, and six months. The results showed significant improvement in the VAS score in the PRP injection group but did not show any difference in the Liverpool elbow score. They suggested that defining details of indications, best platelet-rich plasma concentration, number and time of injections, as well as rehabilitation protocol might increase the method’s effectiveness. Similar results were also observed in our study. Peerbooms JC, Sluimer J, Brujin DJ, Gosens T2 did a study on an effective good result in tennis elbow by a design of an RCT in 100 patients(51-PRP) and (49-corticosteroids). Patients were evaluated using the visual analog score (VAS) and a disability of arm, shoulder, and hand score after 1 year. The results concluded that PRP reduces pain and increases functions compared to corticosteroid injection.

The improved results within the group between the follow-ups which is statistically significant in our study compared to other studies are possible because of the larger volume of PRP which we are injecting compared to the other study in which they give 3ml while we give 5 ml. While giving this 5 ml, we probably end up having more quantity of growth factors(Transforming Growth Factor, Vascular Endothelial Growth Factor, Fibroblast Growth Factor, Epidermal Growth Factor, Platelet-Derived Growth Factor). 7 This possibly is giving better results compared to other studies. However, at the same time, there would be possibly more pain because of a large amount of PRP injecting into the patients on the day of injection. However, our methodology did not consider this and we have not recorded the VAS score on the day of injection to know whether there was an increasing amount of pain in patients treated with 5 ml of PRP injection.

This research did not receive any specific grant from funding agencies in the public, commercial, or not-for-profit sectors.