Introduction: In recent years, biologic therapies such as platelet-rich plasma (PRP) have gained prominence in multiple orthopedics degenerative tendinopathy and ligamental pathology. This research aimed to assess the clinical effectiveness of autologous platelet-rich plasma injection in cases of recalcitrant plantar fasciitis (RPF) over a long period.

Materials and Methods: A prospective observational study was performed on RPF that did not experience pain relief after three months of conservative therapy. Under sterile conditions, inject approximately 3ml of platelet-rich plasma mixed with 0.5ml lignocaine into the maximum tender point of the heel. Visual Analogue Score for Pain, the American Orthopedics Foot, and Ankle Society (AOFAS) Ankle, and Hind Foot Score at one month, three months, six months, one year, and two years after injection.

Conclusion: The outcomes of autologous PRP injection in recalcitrant plantar fasciitis are reliable, stable, and predictable in both long- and short-term follow-up. PRP injection is safer and not associated with serious complications as in the case of steroid injection.

Plantar heel pain is a frequent concern seen by orthopedic surgeons. One of every ten people will experience heel pain at any point in their lives.1 Plantar fasciitis (PF) affects 15% of all patients complaining of plantar heel pain, according to Rome et al., in both nonathletic and athletic populations.2

The most frequent cause of plantar heel pain is plantar fasciitis (PF). 1 Plantar fasciitis is usually unilateral, although up to 30% of cases may appear bilaterally.3 It is a degenerative disease of the plantar fascia caused by repetitive trauma at its origin on the calcaneus. It is primarily a clinical diagnosis distinguished by infero-medial heel pain, which is frequently exacerbated by the first few step in the morning.2, 3, 4 Overweight individuals, people who stand for long periods at work, and persons whose occupations need them to walk on uneven surfaces are more prone to it.2, 4, 5

Conservative therapy, such as stretching exercises for the Achilles tendon and plantar fascia, cushioned insoles or orthotics to correct biomechanical causes, night splints, movement adjustment, and the use of basic analgesics, may resolve symptoms in the majority of instances.1, 3 Approximately 10% of patients do not respond to conservative therapy and must undergo invasive therapy.6 In the second line of therapy, corticosteroid injection is used. However, steroid injection has been related to several complications such as skin atrophy, fat pad atrophy, and plantar fascia rupture.7 Surgical fascia release should be seen as a last resort, and its success rate has been variable.8

In recent years, biologic therapies such as platelet-rich plasma (PRP) have gained importance in multiple orthopedics degenerative tendinopathy and ligamental pathology. Platelet-rich plasma (PRP) is characterized as an autologous blood sample with platelet concentrations above baseline.9 Platelets play an important part in the natural healing response by secreting growth factors locally and recruiting reparative cells.10, 11 This research aimed to assess the clinical effectiveness of autologous platelet-rich plasma injection in cases of recalcitrant plantar fascitis (RPF) over a long period.

From December 2013 to March 2018, a prospective observational study was performed at a tertiary orthopedics center after ethical committee acceptance following the Helsinki declaration. Patients with RPF that did not experience pain relief after three months of conservative therapy were included in the study. Radiological evaluation was obtained to rule out other factors such as a calcaneal tumor, fracture-dislocation of tarsal bones, stress fracture, or metabolic infection that were omitted from the study. Patients who had previously received a local steroid injection or a surgical procedure were also disqualified. RPF patients who had given written informed consent were considered for autologous PRP injection.

Under sterile conditions, blood was drawn from the patient's antecubital vein and placed directly in a tri-sodium citrate vacutainer vials, seven vials (approx. 21 ml) for bilateral RPF and four (approx. 12 ml) for unilateral RPF. The standing system was used for the initial plasma separation (vial was left in standing position for 1hour). After 1 hour, the vacutainer vials were spun at a speed of 1600 rpm for ten minutes. PRP was isolated at the top of the vial, followed by a yellow buffy coat rich in white blood cells and red blood cell sediment at the bottom. PRP just above the yellow buffy layer was separated. PRP with platelet counts greater than 2.5 times that of the patient's blood platelet counts was approved for injection.

A peppering technique (single skin entry, partially withdrawing the needle, redirecting in a clockwise direction, and allowing repeated penetrations to the fascia, injecting just above and just below plantar fascia) was used to inject approximately 3ml of platelet-rich plasma mixed with 0.5ml lignocaine into the maximum tender point of the heel.

Patients are advised to refrain from engaging in sports activities such as running or jumping for at least four weeks. Nonsteroidal anti-inflammatory medications were typically discouraged because they interfered with the post-injection inflammatory healing mechanism. Opioids Analgesics were used when needed.

Both pre-injection and post-injection patients were evaluated for clinical improvement using the Visual Analogue Score for Pain and the American Orthopedics Foot and Ankle Society (AOFAS) Ankle and Hind Foot Score at one month, three months, six months, one year, and two years after injection.

The Visual Analogue Scale (VAS) measures the pain level that a patient experiences on a scale ranging from zero to extreme pain. A VAS is usually a horizontal line of 100 mm length, with word descriptors at either end. Pain evaluation is inherently subjective.12 The ankle hindfoot score systems developed by the American Orthopaedic Foot and Ankle Society (AOFAS) combine both subjective and objective variables into numerical measures to describe a function, alignment, and pain 13. According to the available literature, several researchers used this scoring method to measure RPF pain and assess the effectiveness of different treatment modalities.

For categorical variables, values are presented as frequency, and for continuous variables, values are presented as mean, standard deviation, and standard error of the mean. With the student t-test (paired T-test) and ANOVA test, clinical progress assessments, mean VAS, and AOFAS were compared with consecutive follow-up visits. Statistical significance is defined p-value less than 0.05. SPSS version 25 was used to analyze the data (SSPS, Chicago, IL).

Two patients at 6 months, one more patient at 12 months, and three more patients at the 2-year visit were lost to follow-up. Two patients did not improve till six months post-injection visit and had intractable pain for which these underwent steroid injection.

The mean visual analog score for pain and the AOFAS hindfoot scores were used to determine the functional outcome of autologous PRP in RPF. The mean VAS score was 7.92 ± 1.2 at pre-injection, was progressively reduced post-injection to 5.61 ± 1.56 at one month, 3.1± .83 at three months, and 2.4 ± .68 at six months and remained at low level 2.5 ± .92 at one year and 2.7 ± .56 at two years. Mean VAS score shows statistically significant pain reduction at successive follow-ups until 6month (p < .05), relief of heel pain remained constant and did not improve significantly until the last appointment at 2year follow-up (p > 0.05) (Table 1) (Figure 1). 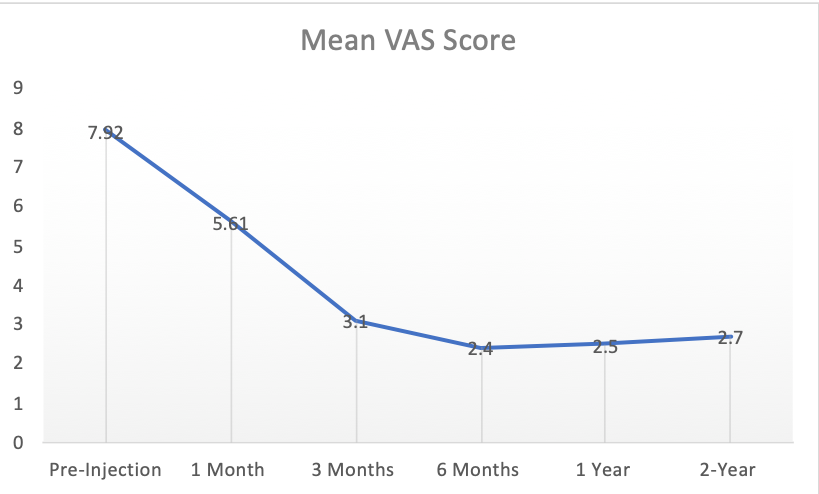 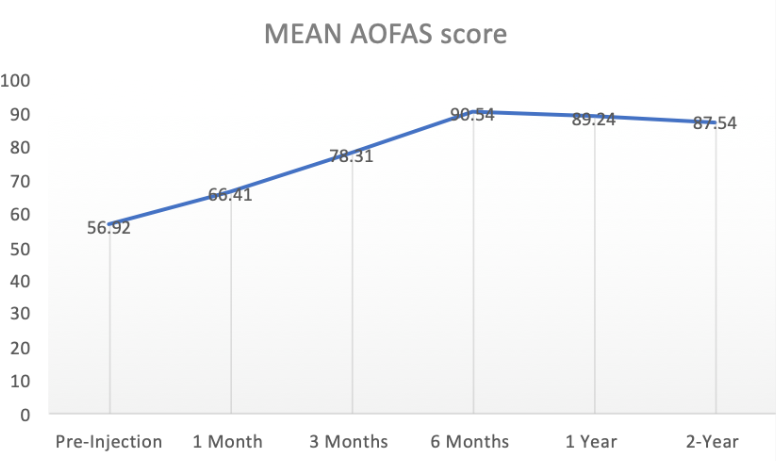 linical assessment with VAS and AOFAS scores various follow-up visits and comparisons between a sequential visit with paired T-test.

Plantar fasciitis (PF) is usually treated with rest, analgesics, and stretching exercises. Injections, especially corticosteroids, are administered in situations where conservative measures have failed. Corticosteroids have a fast relief for pain relief, with a large proportion of patients experiencing relapse and recurrence on long follow-up.3, 6, 14 In recent years, there has been a growth in PRP use in a variety of therapeutic circumstances such as epicondylitis, rotator cuff, patellar and calcaneal tendinopathies, and proximal plantar fasciitis.9

PRP contains a higher concentration of platelets than whole blood. The reason for using PRP is to improve tendon regenerative abilities by delivering cytokines in hyper-physiologic concentrations, which could stimulate cellular chemotaxis, matrix synthesis, and proliferation.10

This study aimed to assess the clinical short-, mid-, and long-term outcomes of autologous PRP injection RPF. Mean VAS and AOFAS scores showed statistically significant pain reduction and functional improvements at successive follow-ups till 6month (p.05); the improvement remained stable and did not change significantly until the last appointment at 2 year follow-up (p> 0.05).

Similarly, Malley et al. retrospectively analyzed chronic plantar fasciitis patients treated with PRP and found that the mean VAS score improved substantially from 6.91 pre-injection to 4.5 at four weeks post-injection. Three of the five FAOS domain' post-injection ratings, including symptoms, pain, and quality of life, improved significantly compared to pre-injection scores, and most of the patients were able to avoid further surgery owing to the PRP injection's improvement. 15

Since most studies evaluating the function of PRP in chronic plantar fasciitis were performed with brief follow-up, there is a possibility that the benefit of PRP's regenerative capacity would not be seen in short-term follow-up.15, 16, 17, 18, 19, 20 As a result, our review included short, mid, and long-term follow-ups in determining the long-term effect of PRP in cases of RPF.

Monto et al. investigated Forty patients with unilateral chronic plantar fasciitis, were randomly assigned to receive either a single injection of 3 cc PRP or a single injection of 40 mg Depo Medrol cortisone. The cortisone group's pre-treatment mean AOFAS score increased at three months but declined at six months, then fell to near baseline values at one year and continued to slide to a final score at two years. In comparison, the pre-treatment AOFAS score in the PRP category rose at three months and remained elevated at 6 and 12 months 24 months.21 In comparison to Monto et al., s study, which included only unilateral cases of chronic plantar fasciitis patients, we included bilateral RPF cases, providing more credibility to our observations.

We did not find any significant complications with PRP injection in our research, as indicated with steroid use in the literature. However, we did notice mild complications such as welling and a rise in discomfort, which were treated with simple interventions.

We were unable to compare outcomes to other treatment modalities due to the lack of a control group in our report; therefore, a comparison study with a larger sample of RPF patients versus other conventional treatment modalities is needed to further validate the efficacy of PRP. Our study's PRP preparation was performed using a basic manual procedure, which may be coupled with various biases attributable to technician experience and laboratory facilities. As a result, standardization of manual PRP techniques is needed.

No financial support was received for the work within this manuscript.

The authors declare they have no conflict of interest.

N Hussain H Johal M Bhandari An evidence-based evaluation on the use of platelet rich plasma in orthopedics – a review of the literatureSICOT-J201735710.1051/sicotj/2017036