Tomar, Govil, and Dhawan: Ochronotic Knee Arthropathy: A rare cause of arthritic knee pain and literature review of surgical considerations during knee arthroplasty

Ochronotic Knee Arthropathy: A rare cause of arthritic knee pain and literature review of surgical considerations during knee arthroplasty

Introduction: Knee osteoarthritis is a common disabling affection in the elderlies. Rarely the arthritis of knee may be due to ochronotic arthropathy. It is often missed or misdiagnosed as osteoarthritis. An autosomal recessive metabolic disorder characterized by the deficiency of homogentisic acid oxidase enzyme preventing metabolism of homogentisic acid lead to homogentisic aciduria. Alkaptonuria progresses to ochronotic degeneration and arthritis. Early management of ochronotic arthropathy is challenging and is mainly limited to control of symptoms. Advanced cases may necessitate surgery.

Discussion: Arthroplasty is an excellent choice for patients with ochronotic arthropathy. However, more information and experience are needed for uniform implant selection and techniques. We report this rare, often missed cause of common knee pain. We review the literature to discuss the specific surgical considerations during knee arthroplasty in such an unusual presentation.

A rare autosomal recessive metabolic disorder like alkaptonuria may often cause significant knee pain.1, 2, 3, 4, 5 The deficiency of the enzyme homogentisic acid oxidase leads to accumulation of homogentisic acid, an intermediary in metabolism of phenylalanine and tyrosine4, 6, 7 It affects one in 250,000 to 1,000,000 individuals.2, 3 The deposition of oxidized homogensitate pigments in connective tissues affects the articular cartilages.1, 3 It leads to chronic inflammation, degeneration, and eventually arthritis.1, 3 Patients with alkaptonuria usually do not show any symptoms and about fifty percent develop ochronotic arthritis. Ochronotic arthropathy becomes symptomatic around fourth decade.1, 4 Men are affected more commonly than women.4 The knee being the commonest site of arthropathy with hip, shoulder and sacroiliac joint may also be involved.1, 4, 5 The general approach is to manage symptoms as they present.1, 5 Exercise and analgesics have beneficial effect but it does not slow the degeneration of joint and progression of arthropathy. When significant degenerative arthritis occurs, arthroplasty gives excellent outcomes comparable to osteoarthritis.1, 4

A 65-year-old male patient presented with history of progressive persistent pain in both knee joints with limited walking ability for last two years. Anti-inflammatory medications, physiotherapy sessions and multiple intra-articular steroid injection yielded no benefit. Patient was diagnosed with alkaptonuria at the age of 40 years. There was a history of intermittent passage of blackish colored urine since childhood. There was no positive family history of the disease. He had past history of spine decompression, cardiac bypass grafting and renal stone surgery.

Examination revealed a short stature with grayish discoloration of the ear pinnae (Figure 1a) and sclera (Figure 1b). Patient had moderate varus aligned bilateral knees with effusion. He could barely walk and had an unstable gait with antalgic component. Range of motion was 10° to 80° of knee flexion bilaterally. There was knee instability associated with lax collateral ligaments. Distal neurovascular examination was normal.

A simultaneous bilateral knee arthroplasty was performed using an anterior medial parapatellar approach. On arthrotomy, the subcutaneous tissues revealed black nodular deposit and extension of arthrotomy revealed hypertrophied synovium. The contracted joint capsule was gritty to incise with minimal joint fluid but extensively blackened articular knee cartilage (Figure 3a). The patella was carefully retracted laterally in apprehension of tendon rupture on forceful retraction. Total synovectomy was done and blackened stiff meniscal pads inside the joints were noted (Figure 3b). Generalized degeneration throughout the knee with extensive articular cartilage loss was observed. The subchondral bone while taking bone cuts revealed black discoloration (Figure 3c). After knee resurfacing, drill holes were made on femur and tibia (Figure 3d). Standard cementing technique was used and a cruciate sacrificing, cemented Depuy PFC Sigma, Johnson and Johnson (USA) arthroplasty was done along with patellar resurfacing and deformity correction (Figure 3e). Intraarticular tranexamic acid was used to minimize blood loss. Mobilization in immediate postoperative period was done and wound healing was uneventful. A good functional range of motion was regained and independent daily activities within six weeks of surgery was achieved. At three months, the arc of motion was pain-free up-to 110° of flexion without extensor lag in both knees. At 24 months follow up, there was stable and pain-free ambulation with an improved KSS score of 95 for both knees (Figure 4a & b).

Postoperative radiographs ( Figure 5a, b & c) showed components in good alignment with no evidence of component loosening. Patient outcome was evaluated and was considered to be satisfactory. The patient gave informed consent for use of data for publication 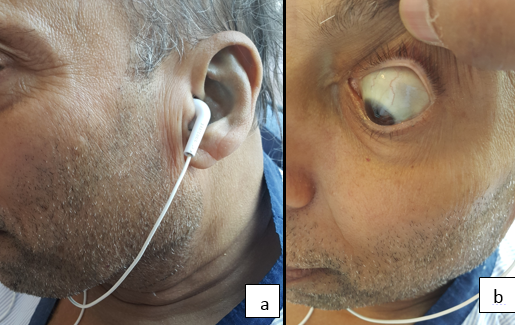 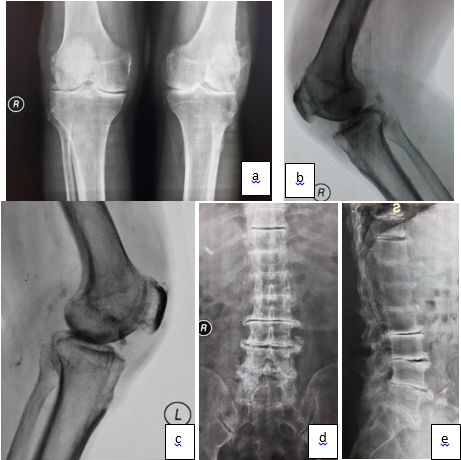 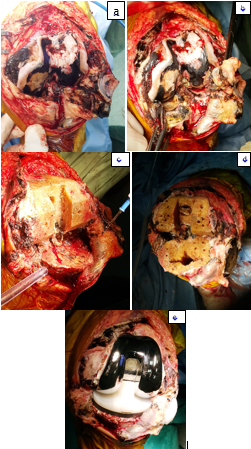 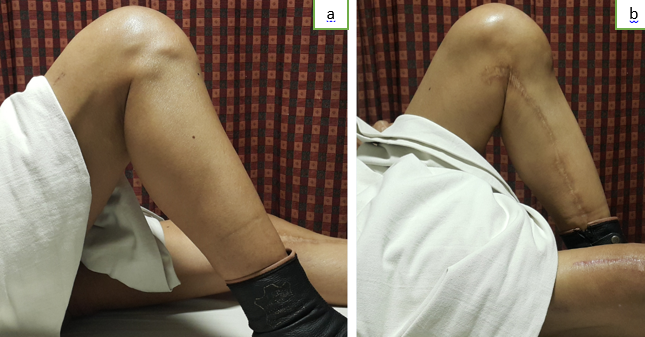 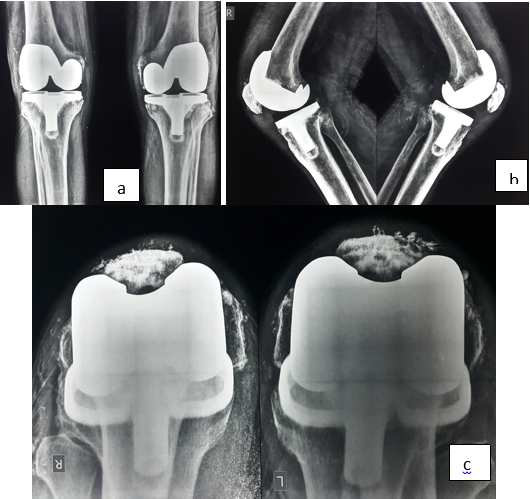 Wolkow and Baumann identified the chemical structure of alkapton as homogentisic acid in 1891. In 1902, Garrod presented evidence that the condition is congenital and familial and occurs more often in families in which there are consanguineous marriages.1 In 1902, Albrehent and Zdareck, interrelated the terms alkaptonuria and ochro­nosis.8

It takes three to four decades before homogentisic acid accumulates in tissues to cause clinical symptoms.2, 9 Accumulation of homogentisic acid and binding to fibrillar collagen becomes irreversible after polymerization however renal tubular excretion system efficiently secretes homogentisic acid. The metabolic disorder passes through three clinical stages of which first being black staining of the clothes getting noticed, second being alkaptonuric ochronosis characterized by pigmentation of various tissues of the body and lastly ochronotic arthritis involving spine and large peripheral joints.7

There are no known medicines to treat alkaptonuria. The surgical treatment for ochronotic arthritis is described in few case reports with short follow-up.3 Knee arthroplasty has been considered as an option of management but few considerations during surgery to avoid intraoperative difficulties have been reviewed.

Preoperative assessment of medical comorbidities may avoid unsuspecting complications. Evaluation of history for associated degenerative spine disease, heart, renal, ophthalmic and prostate related issues should be considered before a planned arthroplasty. The pain management by epidural medication or block application have increased relevance.

Tendon ruptures may complicate the arthroplasty. Difficulties in displacing the patella as reported by Spencer et al. are indicative of quadriceps and patellar tendon hardening.3 Popping sound as noticed by Patel et al can be a sign of tear or detachment.1 Tendon can be friable, stiff and prone to ruptures due to connective tissue disarray.9

Bone quality is a matter of concern. The osteoporosis may compromise and perioperative fractures may occur. Cuts should be made carefully. A cemented arthroplasty should be considered because of bone softness. There is limited data on use of uncemented prosthesis for ochronotic arthropathy. Konttinen et al and Aydogdu et al, performed cement less arthroplasty as the quality of bone was considered good.2, 5 The long-term survival of these implants has not been reported.2 Fisher and Davis reported multiple fractures in their case although they found no associated risk factor with bone health.5

Blood loss may be excessive both intra and postoperatively.1 Intraarticular and systemic use of tranexamic acid may be considered to decrease blood loss. Use of drains for prolonged period was suggested by Patel et al. The use of blood substitutes may be required.

Simultaneous or sequential arthroplasty may be debated. Interestingly, most of the cases in the literature had been treated by bilateral arthroplasty.5 Spencer et al, did eleven arthroplasties in both upper and lower limbs in three patients with end-stage ochronotic large joint degenerative disease, with good clinical results and no evidence of implant failure or complications on long term follow up.3

There is lack of uniformity in reporting the outcome of cases. Spencer et al had satisfactory results in their three cases.5 However, only Aydoğdu et al reported pre- and postoperative knee scores. The uniform reporting on knee scores will strengthen the outcome assessment.

Knee arthroplasty in a patient with significant degenerative arthritis secondary to ochronosis had excellent outcomes.4, 5, 10 Awareness of this rare but easily recognizable condition is necessary, to avoid confusion with degenerative osteoarthropathy.

Ochronotic arthritis is a rare disorder with challenges in management and limited to alleviating the knee pain. Advanced ochronotic arthritis necessitate arthroplasty. The type of prosthesis used depends on surgeon’s preference and individual characteristics of bone and soft tissue. We need more uniform detailed information to convert experience to real knowledge.

We declare there is no conflict of interest.

We declare that this study has not received any funding from agencies in the public, commercial, or not-for-profit sectors.