Palakuri and Muthu: Does leucocyte concentration have a role in the outcome of PRP therapy for lateral epicondylitis – A randomized controlled trial

Materials and Methods: This is a double-blinded randomized controlled trial conducted on patients having lateral epicondylitis comparing the pain relief and functional effects of leucocyte-poor PRP (LP-PRP) and leucocyte-rich PRP (LR-PRP) at one, three, six, and twelve months post-injection using the Visual Analog Scale (VAS) for pain and Mayo Elbow Performance Score (MEPS) for function.

Regenerative medicine has paved the way for less invasive techniques, minimal morbidity, and percutaneous administration of biological substances with osteoinductive and osteoconductive properties.1 Platelet-rich plasma (PRP) injection has evolved as a big boon in the treatment of musculoskeletal disorders. The usage of autologous PRP for the management of lateral epicondylitis was increasing among orthopedic surgeons and regenerative orthobiologists.2 Extensive researches were conducted on the biomolecules that present in PRP to trace the mechanism involved in alleviating the disease process in lateral epicondylitis.3 There was no consensus on the technique of PRP preparation, the type of PRP to be used, the dose and frequency of PR injection and the amount of growth factors to be delivered at the pathological site for various diseases.4, 5, 6

A controversy on the usage is use of either leucocyte rich or leucocyte poor PRP for lateral epicondylitis. Leucocyte content in PRP solution modulates inflammation through secretion of inflammatory cytokines and matrix metalloproteinases which exaggerate an inflammatory response at the site of action.7 Lana et al.8 devised MARSPILL classification to identify the variables responsible for the therapeutic action of PRP. Leucocyte-rich PRP (LR-PRP) elicits a catabolic, inflammatory, and detrimental environment while Leucocyte-poor PRP (LP-PRP) elicits an anabolic effect on the tissues being injected. 9 In acute pathologies, LR-PRP helps in inflammatory regeneration and early angiogenesis at the injury site whereas LR-PRP in chronic pathologies leads to the formation of scar tissue at the injury site.10 The histological evaluation of chronic tendinopathies of the animal model demonstrated that large collagen fibril formation with LP-PRP. The usage of LR-PRP in osteoarthritis (OA) knee in vivo and in vitro demonstrated the detrimental effect of cartilage by increasing pro-inflammatory cytokines and anti-catabolic properties.9

This is a prospective double-blinded randomized controlled study conducted in clinically diagnosed lateral epicondylitis. Patients in the age group between 18-65 years were included in the study. All the cases were clinically diagnosed. Patients with thrombocytopenia with a platelet count of <105/ul, septicemia, local infections, consistent use of nonsteroidal anti-inflammatory drugs within 48hours of the procedure, or corticosteroid injection at the site of treatment or the use of systemic corticosteroids within a month were excluded from the study.

All patients enrolled in the study were divided into two groups, Group A who received the LR-PRP, and Group B who received LP-PRP. The PRP was infiltrated by a single physician using an aseptic technique. We used 1.5ml of a dual-spin leucocyte-rich variant of the PRP for patients of Group A and 1.5 ml of a dual-spin leucocyte-poor variant of the PRP for patients with Group B. The clinical outcome of the patients was evaluated using Visual Analogue Score (VAS) for pain and functional outcome using Mayo Elbow Performance Score (MEPS) measured pre-intervention and 1 month, 3 months, 6 months, and 12 months post-intervention.

We used IBM SPSS Version 25 (Chicago, Illinois) for statistical analysis. Mean and standard deviations (SD) were used for the presentation of continuous variables and proportions were used for nominal variables. We used the Shapiro-Wilk normality test to the data obtained to check for normality. A paired student t-test was used for comparison of the functional outcome measures pre-and post-intervention and chi-square test for between-group comparisons. A p-value of less than 0.05 was considered statistically significant.

General characteristics of the patients included in the study

Comparison of mean score of VAS and MEP between the two groups.

Mean comparison of VAS and MEPS at various visits with pre-treatment score. 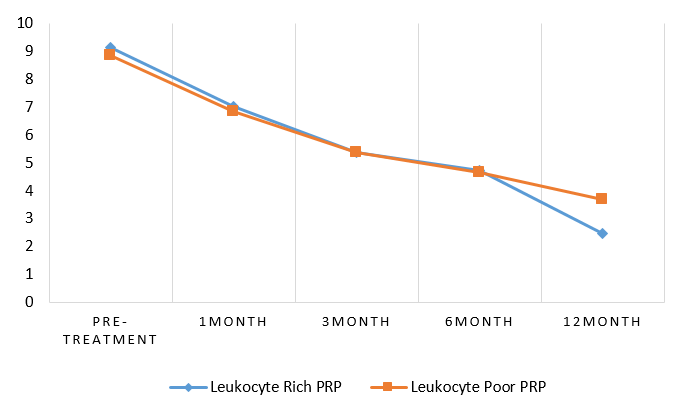 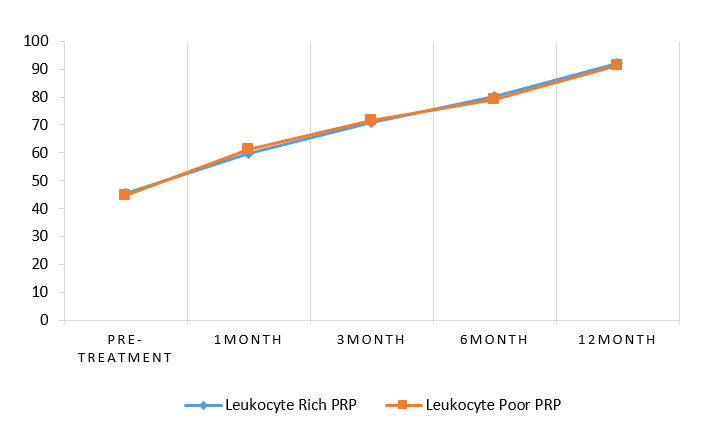 Clinical studies assessing PRP injections in lateral epicondylitis typically do not take into consideration the concentration of leukocytes in operation despite a growing number of clinical trials over time. Several studies have indicated that leukocytes in PRP have positive anti-infectious, immunoregulatory, and angiogenesis effects while some studies have proposed that leukocytes should be withdrawn from PRP and LP-PRP are the ideal candidates for the lateral epicondylitis.11

The implications of leukocyte concentration in PRP are not well known. In a study comparing the influence of LR-PRP and corticosteroid on grip measures in patients with lateral epicondylitis by Gautam et al.12 patients were assessed in the second week, the sixth week, third month, and sixth month. A substantial increase in the LR-PRP group was observed at the sixth month relative to pre-treatment values. As a result of these effects, they concluded that increasing the concentration of leukocytes in PRP can have a beneficial impact on tendon healing in the long term. This may be attributed to the enhancement of wound healing by increasing the local inflammatory response to leukocytes.

Limitations of the study are that magnetic resonance imaging should have been done pre and post-injection in the affected area for objective radiological quantification of the improvement in the patients. Our study was conducted on small sample size and is a single-center study with a short follow-up. Further studies with a large sample size involving multiple centers are needed to understand the effect of preparation techniques and the method of application of PRP in the long term.

The authors declare no potential conflict of interests.

No funding was utilized for the conduction of the study.

N Hussain H Johal M Bhandari An evidence-based evaluation on the use of platelet rich plasma in orthopedics – a review of the literatureSICOT-J201735710.1051/sicotj/2017036

M Yerlikaya Comparison of Effects of Leukocyte-Rich and Leukocyte-Poor Platelet-Rich Plasma on Pain and Functionality in Patients With Lateral EpicondylitisArch Rheumatol201833173910.5606/archrheumatol.2018.6336