Saravanakumar and Chellamuthu: USG guided platelet rich plasma therapy for chronic resistant tendinopathies – Is it the next gold standard?

USG guided platelet rich plasma therapy for chronic resistant tendinopathies – Is it the next gold standard?

Background: One of the most common and under-treated problems faced by orthopedic surgeons is tendinopathy. Contradictory to the initial belief that tendinopathies are an inflammatory pathology, the histopathological analysis suggested that it is a disease of degeneration with characteristic hypercellularity, vascular hyperplasia, and collagen disorganization. Platelet-rich plasma (PRP) is a treatment modality attempting to modulate chronic inflammation and stimulate tissue regeneration.

Materials and Methods: This is a prospective study conducted on patients having tendinopathies on an outpatient basis. PRP infiltration was done at the tendinopathy site for 95 patients between the ages of 18 to 65 years. The patients with tendinopathies resistant to conservative management were included. Pre-injection Disabilities of the Arm, Shoulder, and Hand (DASH) scores and Visual Analogue Score (VAS) were recorded. The patients were then injected with PRP at the site of the tendinopathy under ultrasound guidance and post-injection DASH and VAS scores were recorded.

Conclusion: PRP injections are a safe and effective treatment for patients presenting with tendinopathies irrespective of their etiologies and location. All the included patients had a consistent improvement in their clinical symptoms with just a single dose thereby reducing the adverse effects due to chronic use of non-steroidal anti-inflammatory drugs and also minimize the risk of surgeries.

Due to the benefits and the minimal risks associated with PRP, it has become an attractive alternative in the management of tendinopathies when other conservative methods have failed.1, 2 When the whole blood sample of the patient is subjected to centrifugation and platelet separation process, a supra-normal concentration of the platelet than the original whole blood sample results, which is called platelet-rich plasma (PRP).3 The PRP once injected into the site of interest, initiates the release of growth factors and stimulates tissue regeneration.4

Multiple variables of PRP such as clinical profile, dose, delivery vehicle, release kinetics have to be considered to attain the full benefit of the injection. PRP when used appropriately, is a revolution in the treatment of tendinopathies with just a milliliter of the patient’s platelets.

This is a prospective study conducted in clinically diagnosed tendinopathies who have failed conservative management for 6 weeks. Patients in the age group between 18-65 years were included in the study. The tendinopathy was diagnosed and characterized using ultrasonography (USG). Patients with thrombocytopenia with a platelet count of <105/ul, septicemia, local infections, consistent use of nonsteroidal anti-inflammatory drugs within 48 hours of the procedure, or corticosteroid injection at the site of treatment or the use of systemic corticosteroids within a month were excluded from the study.

The PRP was infiltrated by a single physician using an aseptic technique using ultrasonography. We used a dual-spin leucocyte-rich variant of the platelet-rich plasma for all patients irrespective of the region involved. The patients were diagnosed to have tendinopathies clinically and pre-injection Disabilities of the Arm, Shoulder, and Hand (DASH) scores and Visual Analogue Score (VAS) were recorded. The patient was then injected with PRP at the site of the tendinopathy under ultrasound guidance and post-injection DASH and VAS scores were recorded. Patients were serially followed up.

We used IBM SPSS Ver 25 for statistical analysis. Mean and standard deviations (SD) were used for the presentation of continuous variables and proportions were used for nominal variables. A paired student t-test was used for comparison of the functional outcome measures pre-and post-intervention and a p-value less than 0.05 was considered statistically significant.

Age-wise distribution of the cases included in the study stratified by diagnosis.

Showing the functional outcome based on DASH Score 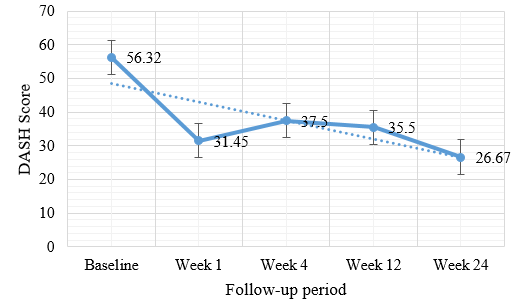 Showing the functional outcome based on VAS Score 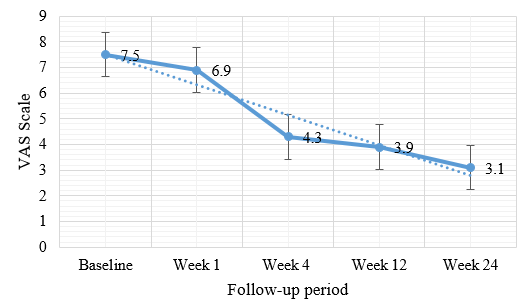 In sports medicine, the number of injuries occurring due to overuse is about 30-50%.6 In general, in physically active individuals, the prevalence of musculoskeletal symptoms increases with the duration of the employment.7 Logistic regression adjusted to the age has shown that people who have worked for 25-35 years are more likely to develop tendinopathy.7 The majority of the overuse injuries of the soft tissues and tendons occur in men due to the more vigorous lifestyle/occupations of the majority of the men as compared to that of women.

We have observed in our study that the majority of the injuries occurred in the age group between 36 – 45 years accounting for 41% of the cases with a male preponderance accounting for 63% of the total cases. These findings are substantiated by the study conducted by Hamilton et al.8 wherein the majority of the cases of epicondylitis fall in the 35-54 age group and the mean age of incidence was 45 years.

Supraspinatus tendinitis was the predominant diagnosis with 48.4% of the cases diagnosed with the condition. Supraspinatus tendinitis occurred predominantly (22/46) in the 26-35 year age group suggesting repetitive overhead abduction activities in this age group. Wolf et al. and Warner et al.9, 10 suggested that certain types of sports requiring repetitive use of an arm at or above the horizontal level and during rapid deceleration such as tennis serves, volleyball smashes and javelin throws produce immense stresses and thereby causing overloading, inflammation, and degeneration of the rotator cuff tendons.

De Quervain's tenosynovitis occurred in 14 of the total cases with a female preponderance with the maximum incidence of the cases occurring in the fourth decade. Werner et al13 in their study stated that in physical workers, the incidence of hand and wrist tendinopathies occurs from 4%-56%. The risk is substantially increased when the wrist is exposed to high force, repetition, or vibration. Awkward posturing of the wrist such as ulnar deviation with a fixed thumb, grasping of objects in radial deviation, violent traction, twisting forces supinating or pronating the wrist may also exacerbate the condition.

Trigger finger in our study had an incidence of 7% with the disease again, affecting the patients in the 3rd and 4th decade. Makkouk et al.14 in their study suggested local trauma and repetitive finger movements and local trauma are the most likely causes leading to degenerative forces causing an increased incidence of triggering in the dominant hand.

On evaluating the DASH scores of the patients, our mean baseline score was 56.32 and the scores decreased to 31.45 in the first week and 43.58 in the fourth week and progressively decreased to 35.5 and 26.7 in the 12th week and the 24th week respectively. A study conducted by Katana et al.19 found significant improvement with good functional outcomes in 56% of the patients. But, this study did not take into account the DASH scores. In our study, only a single injection of PRP was infiltrated considering the fact that PRP has the ability to recruit reparative cells.20 This suggests that a single dose of PRP infiltration has a lasting effect on the healing process.

In vitro studies suggest that PRP inhibits interleukin-1 (IL-1) produced by macrophages and thereby reduces their proliferation and in turn the inflammation. PRP also regenerated tissue phenotypically similar to the normal tendon and muscle by stimulating the resting stem cells. 21 In our study, the double-centrifugation method was used to prepare the PRP. Mautner et al. 22 evaluated patients receiving PRP injections and almost 60% required only a single dose, 30% required two doses and only 10% required three or more doses. Gonshor et al.23 suggested the two-stage technique for processing PRP and had a platelet concentration which was three to five times higher than that of the whole blood baseline, the PDGF-AB was above 500% and the TGF-β1 was more than 800%.

Our study has a few limitations. The sample size and the follow-up of the included patients were limited. We did not form a control group to estimate the placebo effect due to the treatment procedure.

PRP injections are a safe and effective treatment for patients presenting with tendinopathies irrespective of their etiologies and location. All the included patients had a consistent improvement in their clinical symptoms with just a single dose thereby reducing the adverse effects due to chronic use of non-steroidal anti-inflammatory drugs and also minimize the risk of surgeries. None of our patients reported back with recurrence of symptoms for 6 months follow-up. PRP being easily prepared on an outpatient basis makes it convenient for both the surgeon as well as the patient, and it is economical. With the help of USG, the infiltration can be done exactly at the site of the lesion. Surgeons encountering economically burdened patients with tendinopathies can easily treat the painful pathology with just a few milliliters of their platelet concentrate thereby making it a potential contender for being a gold standard in the management of chronic resistant tendinopathies.

The authors declare no conflict of interest.

No funding was utilized for the conduction of this study.