Introduction: Bizarre parosteal osteochondromatous proliferation (BPOP) presents as painless bony swelling and also known as Nora’s lesion. It is a benign surface osteocartilaginous lesion. This condition is seen most commonly in hands followed by feet. Long bone involvement is rare.

Materials and Methods: This is a retrospective study of the patients who had visited the orthopedic OPD of our institute from January 2011 to December 2019. The diagnosis of BPOP was made by radiological evaluation and confirmed by histopathological evaluation.

Results: There were 8 cases included in this study. Out of them, 4 cases (50%) were female, and 4 cases (50%) male. The age distribution of patients was 14 years to 36 years. The duration of the history of present illness was 6 months to 3 years. There were 6 cases (75%) of the upper limb and 2 cases (25%) of the lower limb. 4 cases (50%) had a history of trauma. All cases were operated on after pre-operative evaluation and the excisional biopsy specimen was sent for histopathological evaluation for confirmation. On follow up 2 cases (25%) had recurrence for which re-operation was done.

Bizarre parosteal osteochondromatous proliferation (BPOP) mainly presents as painless bony swelling and also known as Nora’s lesion. It is a benign surface osteocartilaginous lesion first described by Nora et al in 1983. This condition is seen most commonly in hands followed by feet, long bones, and skull. It is more common in adults in their third to fourth decades. Nora’s lesion has been reported commonly in the proximal and middle phalanges, metacarpal, and metatarsal bones but the involvement of more proximal bones like radius, ulna, tibia fibula is also seen.1

Most of the patients present with painless bony swelling. The etiology of this lesion remains unknown but some authors hypothesized that traumatic events could be the trigger factor for it. 2 However, there are only 30% of the cases reported with a history of trauma. Radiologically it appears as a calcified mass attached to the outer surface of the bone cortex without involvement of the medullary cavity and can mimic an exostosis, an osteochondroma, or a malignant condition. 3

This is a retrospective study in the period between January 2011 and December 2019. There were a total of 176 cases operated for benign bony swelling of upper and lower limbs during the period. Of these only 8 cases were of BPOP.

Among 8 cases there were 4 cases of females and 4 cases of males. The age of patients varied from 14 years to 36 years and the duration of illness at presentation from 6 months to 3 years. Out of 8 patients, 6 had complaints in the upper limb and 2 in their lower limb.

All the patients with bony swelling of the upper and lower limb were evaluated clinically with detailed history. Among 8 cases there were only 4 cases had a history of trauma. There was no history of trauma in the remaining 4 cases.

A presumptive diagnosis of exostosis was made and we decided to perform surgical resection in cases that had immature bones (2 cases with less than 18 years of age). Patients with age more than 18 years underwent MRI.

On MRI all lesions originated from the periosteal aspect with intact cortex and no continuity with the medullary cavity. The margins of the lesion showed low-signal intensity on T1-weighted images and a high-signal intensity on T2-weighted images. The lesion was not enhanced on MRI with gadolinium contrast. As the lesion had no clear continuity with the medulla a presumptive diagnosis of BPOP.

All the cases underwent surgical excision after the pre-operative evaluation. The lesion was excised completely in all the cases with the underlying cortex to avoid any recurrence of the lesion

During follow-up, on every visit radiological evaluation was done to check the recurrence of the lesion. There were 2 cases of recurrence at one year of follow up for which reoperation was done. The details of the patients are shown in Table 1.

General characteristics of the included cases 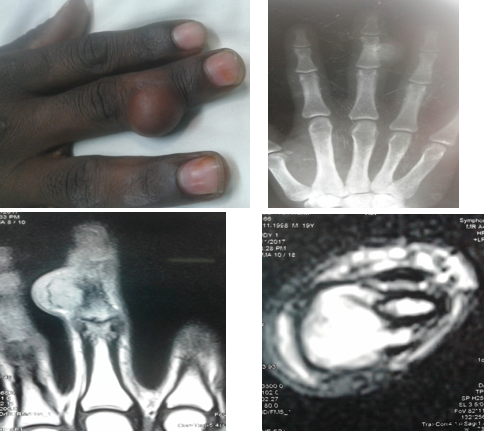 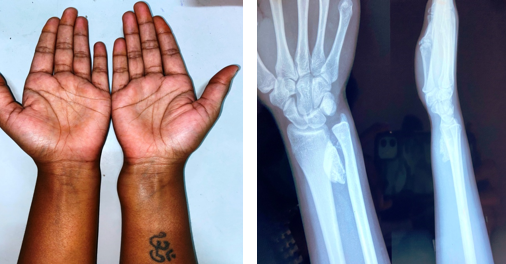 BPOP is a relatively rare disease that most commonly presents as a parosteal bony swelling in the short bones of the hands and feet. BPOP of the distal end of long bones is very uncommon. BPOP has no gender preference. 4 It can affect patients at any age, but most common in their 3rd and 4th decades.5, 3 Some chromosomal anomalies has been associated with BPOP including t(1;17) (q32;q21) and t(1;17) (q42;q23).6, 7

BPOP expands broadly in continuity with the cortical bone producing parosteal mass. BPOP is often confused with an osteochondroma as it is covered by a cartilage cap in some cases with no accompanying bony destruction. Because an osteochondroma occurs more often in the metaphyseal region of long bones, this association is particularly important.8 BPOP occasionally presents as calcification and ossification on X-ray. On MRI BPOP lesions lack continuity with the medullary cavity while osteochondroma maintain continuity with the medullary cavity. The margins of the BPOP lesion show low-signal intensity on T1-weighted images and a high-signal intensity on T2-weighted images. The lesion was not enhanced on MRI with gadolinium contrast done in two cases, suggesting the proliferation of cartilage cells.9

Surgery is performed in every case to excise the bony swelling with decortication of the underlying cortical bone to reduce the tumor recurrence rate. Biopsy sent for histopathological examination showed cartilage at the margins of the lesion, irregular mature bone or evidence of ossification just beneath, and bone formation at the base of the lesion.10 Because the marginal cartilage resembled reactive fibrocartilage, not the hyaline cartilage usually seen in the cartilage cap of osteochondromas, it was possible to distinguish the lesion from an osteochondroma. Additionally, the bone trabeculae were irregularly distributed, some being basophilic and incompletely ossified. There was a mixed area of bone, cartilage, and fibrous granulation tissue resembling a fracture callus. Though some of the chondrocytes had mild atypical features but there was no neoplastic production of osteoid tissue. Therefore, it was possible to differentiate BPOP lesions from malignant tumors, such as a parosteal or periosteal osteosarcoma.11, 12

BPOP has been reported to recur at high rates (20–55 %) after surgical resection. In general, observation alone is considered adequate for asymptomatic BPOP, but simple excision is indicated for patients with pain or dysfunction. Resection of the capsule of the lesion and decortication of the underlying cortical bone is reportedly important to reduce recurrence rates. Further long-term follow-up is warranted because recurrence is reported to occur from 10 months to 10 years (49 months on average) after surgery.4

Dorfman described a spectrum of reactive lesions of which the first stage is known as florid reactive periostitis and pathologically consists of spindle cells with minimal osteocartilaginous proliferation. Later, new bone and metaplastic cartilage become more prominent (Bizarre Parosteal Osteochondromatous Proliferation). Finally, the focus of ossification matures and a bony base is formed with a cartilage cap (Turret Exostosis). When located sublingually it is called a Subungual Exostosis.11

Radiographic differential diagnosis includes conventional Osteochondroma, Subungual Exostosis, Florid Reactive Periostitis, Myositis Ossificans, Turret Exostosis, Peripheral Chondrosarcoma, Periosteal, and Parosteal Osteosarcoma, and Periosteal Chondrosarcoma.10, 6, 13 Osteochondromas are uncommon in the small bones of hands and feet are not characterized by an intact cortex underneath as in BPOP.10 Because of its parosteal location, bizarre parosteal osteochondromatous proliferation of bone should be distinguished from parosteal osteogenic sarcoma.9, 12 Parosteal osteosarcoma is rarely found in the hands and feet. It typically appears as a dense lobulated mass attached by a broad-based pedicle to the cortex and has heavy mineralization with a sclerotic appearance on plain films.

We are reporting 8 cases of BPOP of both upper and lower limb bones. The local recurrence rate after surgical resection of the lesion is high. One year after surgery, most of the patients had no complaints except recurrence in 2 patients. Further long-term follow-up of patients is needed to check for recurrence.

Written and informed consent was obtained from the patient for the publication of this paper and any accompanying images.

All authors have declared no conflict of interests.