Kumar, Sreenivas, and Kasturi: A ssociation of calcium and Vitamin D levels in fragility fractures in the elderly: A study in a tertiary care centre

A ssociation of calcium and Vitamin D levels in fragility fractures in the elderly: A study in a tertiary care centre

Materials and Methods: 76 patients over the age of 60 years, who had been admitted in our hospital due to fragility fractures, who were were mobile, either independently or with help such as stick, walking frame or wheel chair were included into the study. The Vitamin D3 levels were classified as sufficient, insufficient and deficient based on Pearce et al classification. Statistical analysis using graphs and tables and fisher’s test was done.

Conclusion: Most of the patients were either had insufficient or deficient Vitamin D level at the time of their fall. Therefore, it is imperative to keep a watch on the vitamin D levels and supplement calcium and vitamin D in medications so that the risk of fall is reduced.

One of the most common morbidities that is associated with the elderly is the fragility fractures. The main cause of fragility fractures is due to osteopororsis. 1 Osteoporosis is a very common skeletal disease the results in progressive destruction of the skeletal mass and the microarchitecture of the bone. 1 Osteoporosis is estimated to occur in 50% of the females and in 20% of the males worldwide. It is thus, one of the most commonly encountered conditions. 2 The most common complication due to the fragility fractures is death. There has been a marked increase of 3.17 times risk of death in the first year after a fragility hip fracture. In case of vertebral fracture, the risk of death is 2.71 times in the second year. 3

Osteoporosis is of two types- primary osteoporosis, which is due to the normal ageing of the individual, which usually results in the lowered levels of estrogen, and secondary osteoporosis which is due to other diseases such as low Vit D levels, diabetes type 2, cardiovascular disease and others. 4, 5, 6 The causes of osteoporosis can be a mix of genetic, metabolic and environmental factors such as alcohol consumption, smoking, low physical activity, low sun exposure. Medications such as anticonvulsants and glucocorticoids also have a great affect on osteoporosis. 7 The common areas where the fragility fractures occur are pelvis, forearm and ribs in the elderly especially the persons aged more than 65 years. In such patients, the morbidity is high, with severe health and social problems not to mention the increase in expenditure. 8 Hip fractures are usually associated with chronic pain, disability, reduced mobility of the person and therefore a longtime nursing care, with increased mortality rate. The mortality rate is more common in men than women. 9, 10, 11, 12, 13, 14

Therefore, the prevention and the treatment of these fragility fractures is very important to reduce the morbidity and mortality of the patients. Of the various lines of treatments available for osteoporosis, one of the primary managements are Calcium and Vitamin D. 15 Bone consists of a very high density of calcium and this is dependant on the intake of calcium during adolescence. As the age progresses, the density begin to slowly reduce. A high intake in the younger years will help in the slow age related loss of calcium in the body. 16, 17, 18, 19 Inadequate intake of calcium will increase the prevalence of osteoporosis as the age advances. 20 Vitamin D is one of the important agents which helps in the absorption of calcium in the body, and also reduces with age. 21 Apart from calcium homeostasis, Vitamin D also ie reported to have an effect on the muscular strength, receptors of which are expressed in the skeletal muscle tissue. Studies have shown that lower levels of Vit D are associated with a higher risk of falls and fractures. 22, 23

This study was done therefore to assess the levels of vitamin D among the elderly with fragility fractures.

This prospective hospital based study was done by the Department of Orthopedics at RVM institute of medical sciences and research center from November 2019 to April 2020. 76 patients over the age of 60 years, who had been admitted in our hospital due to fragility fractures were included into the study. All the persons who were included were mobile, either independently or with help such as stick, walking frame or wheel chair. Those bedridden persons who sustained fractures due to falling off were excluded from the study. All the subjects had no serious medical ailments and had a life expectance of another 10 years. Persons who received drugs which can alter the bone metabolism were excluded, such as corticosteroids, anticonvulsants, thyroxine or fluoride salts.

This study was done after the approval of the institutional ethical committee clearance and after attaining the informed consent from all the subjects. The demographic details such as age, height, weight, Body Mass Index was collected from al the patients. They were subjected to medical and clinical analysis. The nature and the extent of the fracture was confirmed by X-Ray of the concerned area. Blood was collected and regular investigations such as hemoglobin, complete blood picture, random blood sugar, cholesterol alkaline phosphatase, creatinine were done using standard methods.

The Vitamin D3 levels were classified as sufficient, insufficient and deficient based on Pearce et al classification1.Statistical analysis using graphs and tables and fisher’s test was done.

Gender categorization of the patients 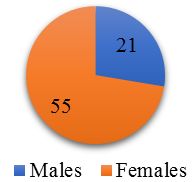 General details of the patients

Majority of the patients with fractures (47.4%) were either walking with 2 sticks or with a walking frame at the time of their fall. 11 (14.5%) of the patients were independently walking, without any support, while 25 (32.9%) of them were walking with slight support, mostly with the help of a stick. In some cases, an attender or a family member aided the patient to walk. 4 (5.3%) of them were on a wheelchair (Table 2).

Mobility of the patients 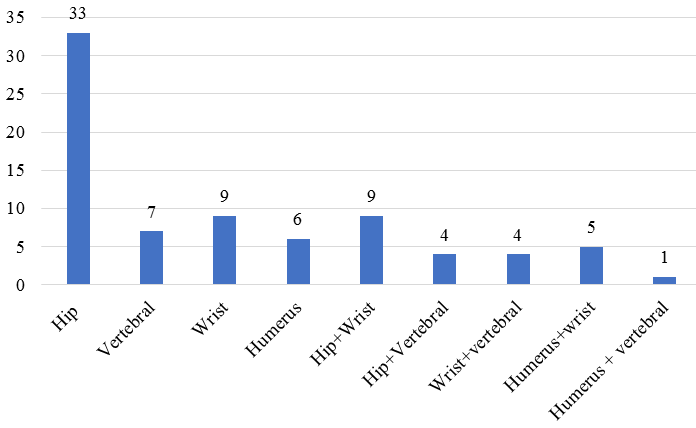 At the time of admission, majority of the patients 57 (75%), were not on any supplements, neither calcium of calcium with Vit D. 13 (17.1%) however were taking Calcium as well as Vit D3 supplements and 6 (7.9%) were taking only Calcium supplements (Figure 3).

Supplements taken by the patients 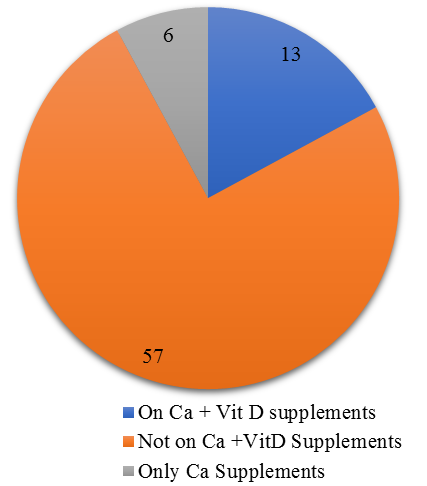 Low vitamin D levels are very often seen in elderly patients along with low calcium levels. This results in fragility fractures in these patients, with severe morbidity and mortality.27

In the present study, the number of females were 2 to 3 times more than the males. A study by Saini et al reported the male to female ration to be 1:3.5, 28 however in other studies such as that by Gallacher et al found no significant difference with sex of the patient to be associated with lower vitamin D levels. 29 The mean age in our study was 75.9 years in males and 72.4 years in females. A study by Gallacher et al reported 80.5 years to be the mean age among the patients with osteoporosis. 30

BMI seems to play an important role in the Vit D levels. Around 70% of the patients were either overweight or obese. It has been reported that BMI is significantly associated with the Vitamin D deficiency and could be due to sequestration of Vit D in the compartments of the body fat, thereby reducing the bioavailable Vit D. 30

The daily necessary levels of Vitamin D is 400-800IU. Most of it is attained from sunlight. As the age increases, the outdoor activities of the persons reduces. As the person spends more and more time indoors, the level of Vit D also reduces.

Studies have shown that Vitamin D, when administered alone does not have any affect in the prevention of fractures, but when given with calcium as a supplement, there is definitely a positive response. 39, 40 Studies have shown that there was a significant difference between the persons who were on Vit D and Calcium supplementation to those without. 28

It has been reported that elderly patients who have been given high doses of vit D and calcium supplements are at lower risk of falls and fractures. 41 This is because the Vit D is associated with the increase in muscle mass and strength. So a reduction in the vit D levels, would result in lower muscle strength and bone mass. 42, 43 This muscle weakness is reversible, when Vit D is supplemented. 44

Most of the patients were either had insufficient or deficient Vitamin D level at the time of their fall. Therefore, after the onset of menopause and especially in the elderly, it is imperative to keep a watch on the vitamin D levels and supplement calcium and vitamin D in medications so that the risk of fall is reduced. This will further reduce the morbidity, quality of life and cost of hospitalization of the patients.

R. P. Heaney Calcium in the prevention and treatment of osteoporosisJ Intern Med 1992231216980

A C Ross J E Manson S A Abrams The 2011 report on dietary reference intakes for calcium and vitamin D from the Institute of Medicine: what clinicians need to knowJ Clin Endocrinol Metab2011961538

H A Bischoff-Ferrari B Dawson-Hughes H B Staehelin J E Orav A E Stuck R Theiler Fall prevention with supplemental and active forms of vitamin D: a meta-analysis of randomised controlled trialsBMJ2009339oct01 1b3692

H. A. Bischoff H. B. Stähelin A. Tyndall R. Theiler Relationship between muscle strength and vitamin D metabolites: are there therapeutic possibilities in the elderly?Zeitschrift für Rheumatologie20005913941